If I was the Education Minister for a day I would make farm visits compulsory. 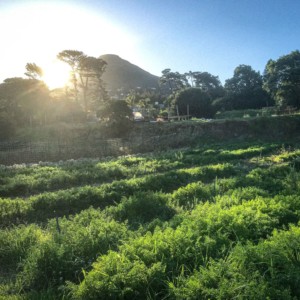 Knowing where your food comes from has always been something that I am passionate about. It is truly the start to what we put into our bodies and therefore we should be a bit more curious about how it was grown and by who.

I chat about modern farming methods at my workshops a lot, as I feel in todays pace of life we have lost the connection between the farmer, farm and our food.

It is this connection which I am trying to rebuild with my Food Stories. Finding a connection between the farm and the food on your plate will make you a better cook – that is 100% my guarantee to you!

I have always been intrigued with Meuse Farm ever since I had the pleasure of eating at Janse & Co restaurant, which sadly has closed down now.

From the outset is was clear that Chef Arno Janse van Rensburg, took immense care in sourcing the best, and often the weird and the wonderful, from small scale growers and producers.

Where in the world (well in this part of the world at least!) did he find blue corn, habanada peppers and shiso? Well from Meuse farm, a small farm in the heart of Hout Bay.

You can imagine my excitement when I realised that Meuse, who supplies the top restaurants in Cape Town with heirloom veggies, expanded their offerings to include weekly vegetable boxes. Jumping the gun again, more on that later. 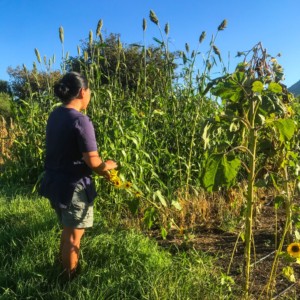 I admire farmers, I really do, in a world where we are taught to follow the path of the least resistance, farmers choose the difficult, sometimes impossible path. A bit like choosing to be a Jedi Knight rather than a Storm Trooper.

We have incredible women farmers in South Africa and this is Iming’s story:

Iming arrived from California in 2003 to further her studies in Cape Town. Coming from a family of entrepreneurs Iming always knew that a traditional 8-5pm office job will not be her future.

Having always been a keen gardener and preferring to be outside in nature, it did not take Iming long to join a local NGO, Green Living in Hout Bay and this is also where she met her husband Jaco.

Soon afer they both dreamed of having their own sustainable but financially viable farm one day and so the idea of Meuse Farm was firmly planted.

Iming and Jaco set themselves the challenge to start a farm that would both be socially and environmentally meaningful as well as intellectually stimulating and financially viable!

When I met Iming it became very clear that Iming is science and business focussed and thus her approach before starting the farm was to fully understand the thinking process around farming including the very technical aspects of it (like soil health and analysis, biology, chemistry, physics, to till or not to till etc) as well as running it like a business.

‘The flow of the season is so important to me’ and Iming wanted to see what this means practically in the field and in a greenhouse.

To follow was the most extraordinary vocational training which took Iming back to the states (twice) to do a seasonal apprenticeship at Barns Centre for Food and Agriculture.

February 2017 was a busy year for Iming and Jaco, soon after her return from the US Iming fell pregnant, they rented some land and with a clear vision in mind, Meuse Farm saw its first shoots of asian speciality veggies appear.

With a tray full of veggie samples, none that Cape Town had seen, Iming went to see the lovely folks at the Greenhouse Restaurant in Constantia and they loved what they saw and she secured her first customer. 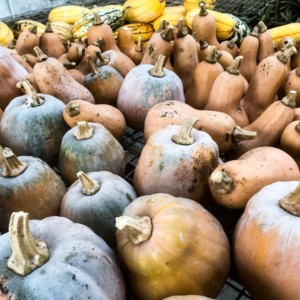 Driving back, she thought, well while I am driving past Chefs Warehouse at Beau Constantia I might as well pay them a visit! I can just see Iming appearing at the door of a busy high-end restaurant with a tray of lovely greens displayed (imagining old fashioned popcorn trays in the cinemas) in her hands, I love that and so did they and she secured her second customer.

The rest is history, today through this incredible learning curve the farm is thriving while growing heirloom and unusual veggies from seeds which Iming imports from seed banks.

Iming wanted to expand the farms offerings and loves the notion of building a farm community and so the Weekly Veggie Boxes launched.

These veggie boxes are unlike any veg box that I have seen (and I have seen a fair few!). 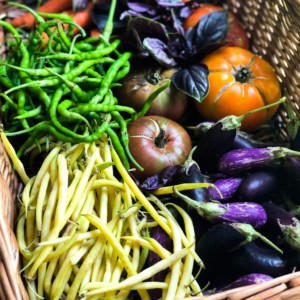 Everything about the weekly bag is aimed at the fanatical and experimental foodie from the beautiful ‘never seen before’ veggies to the flavour postcards accompanying each box and which are now decorating my fridge. As a foodie it doesn’t feel like effort popping over the mountain to collect a bag every Tuesday. Delivery, however is something they are considering in the future.

‘Plants form a relationship with the bacteria in the soil’ the healthier the soil the better the relationship.

With autumn approaching the hard working beds are left to rest coated thickly with a cover crop but while the farm rests, the harvest bags will thankfully continue and I can’t wait to see what will appear in my veg bag once spring has sprung.

This is a farm close to a foodies heart where extraordinary veggies, often grown for flavour, are harvested on the day to pop into the weekly bags.

Everything in the boxes is grown on the farm and to me this is where the magic of Meuse Farm lies, truly from farm to fork grown by a passionate farmer.

Back in the early days of Meuse Farm, Jaco once asked Iming if after all of this he wonders if her ‘idea of farming will match the reality of farming’ to which she answered four years later ‘  farming turned out to be much better than I could ever imagine ‘.

To Order: Weekly veg box are available for collection every Tuesday from Meuse Farm in Hout Bay.